Explore one of the greatest wine-growing regions woven with epicurean delights when you cruise along the Rhône... learn about the river's importance in history and culture throughout time 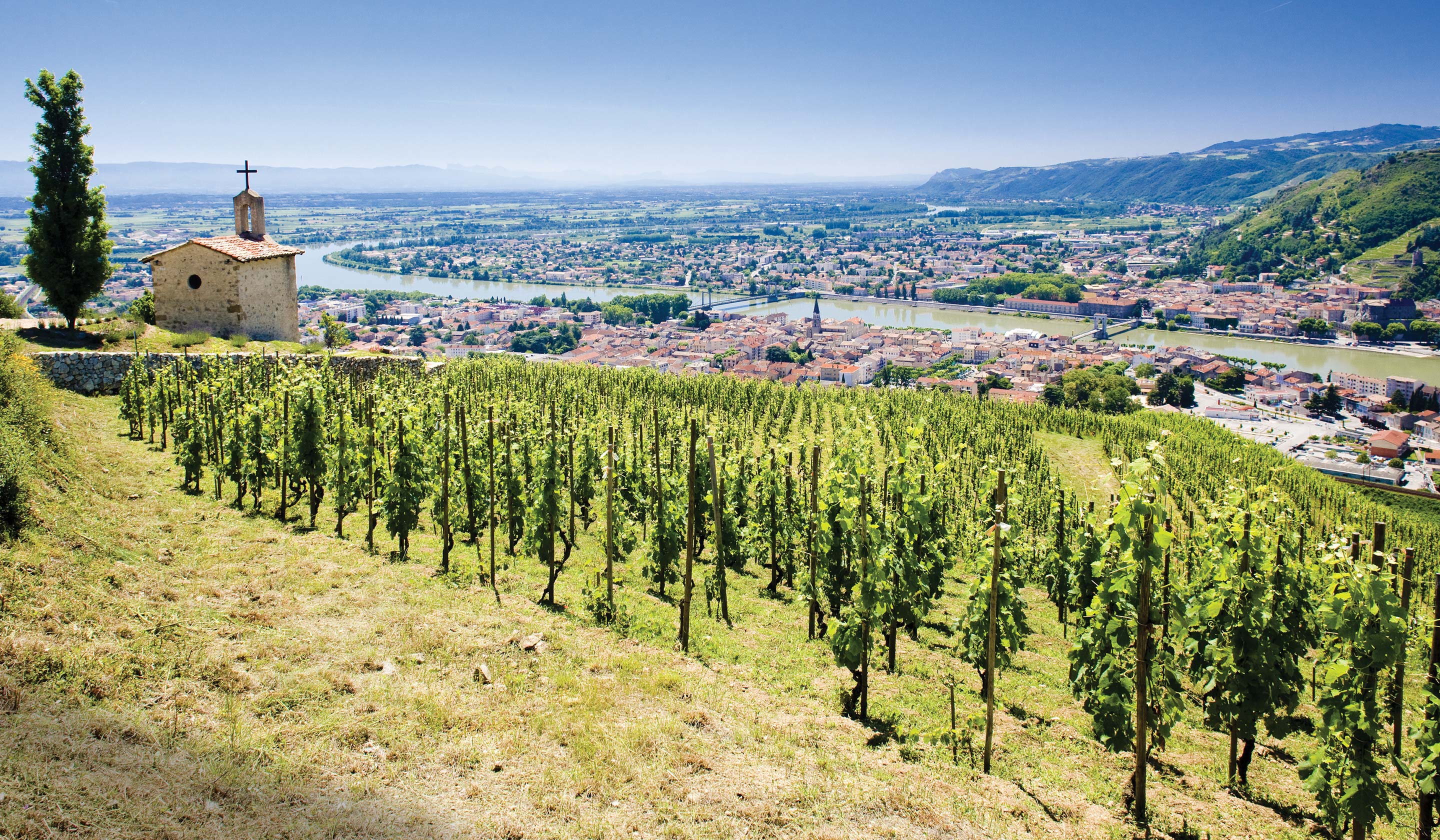 The second-longest river in France, the Rhône River originates in Switzerland, from the Rhône Glacier in the Swiss Alps (in the canton of Valais). It first flows generally to the northwest into Lake Geneva, then exits the lake and meanders to the southwest from Switzerland into France, meeting the Saône River in the vicinity of Lyon. The Rhône then flows south through southeastern France to the Mediterranean Sea. Near its mouth, at the city of Arles in Provence, the Rhône splits into two branches, the Great Rhône and the Little Rhône, forming a delta in the Camargue region.

Source: Rhône Glacier in Valais, Switzerland, in the Swiss Alps

Mouth: In the Rhône Delta in La Camargue, at the Mediterranean Sea

Oldest Trade Routes:
The Rhône has served as an important inland trade route since the time of the ancient Greeks and Romans, connecting the eastern and central portions of the Roman province of Gaul to the Mediterranean. From medieval times, the waterway linked such cities as Avignon, Vienne and Arles with ports on the Mediterranean. Goods were hauled by barge (which took about three weeks); up to the 19th century, passengers were often transported in horse-drawn water coaches (coches d'eau). 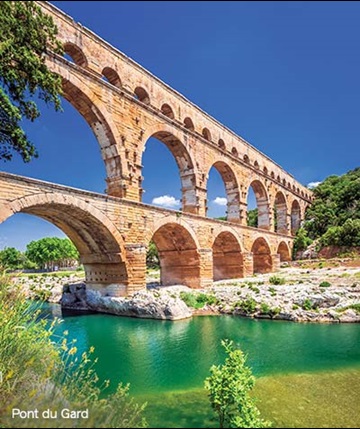 Countries:
The Rhône flows through the modern-day nations of Switzerland and France.

Locks Along the Rhône River: 10

Key Cities Along or Near the Rhône River:
Numerous historic towns and cities (mostly in modern-day France) have grown up directly on the Rhône River or its key tributary to the north, the Saône; others occupy the wider Rhône Basin. The Rhône Basin is home to the historic French regions of Provence, Burgundy (Bourgogne), Auvergne, Rhône-Alps and Languedoc-Roussillon.

A Brief History of the Rhône River

Early Civilizations Along the Rhône
The earliest uses of the Rhône can be traced back well into ancient times. Numerous Celtic tribes were among the early residents of the Rhône River Basin; these included the Allobroges, Helveii, Seduni, Sequani, Segobriges, Segusiavi and Vocontii tribes. Exploration and trade along the river by the Greeks helped spread their influence among the Celtic peoples of the region, such as the Hallstatt and La Tène cultures of the Iron Age.

Roman Empire
The region of Europe known as Gaul (comprising present-day France, Luxembourg and Belgium, and parts of Switzerland, Italy, the Netherlands and Germany), encompassing the Rhône Basin and home to the Celts, came under Roman domination during the 2nd and 1st centuries BC, cemented by Julius Caesar's victory in the Gallic Wars in 51 BC. The Rhône region remained under Roman rule until the 5th century AD; the capital of Roman Gaul for much of that period was the city of Lugdunum (present-day Lyon) on the Rhône.

The "Dark Ages" (Early Middle Ages, 5th-10th centuries)
As the Roman Empire crumbled during the 4th and 5th centuries AD, Gaul gradually fell under the control of the Franks, culminating in a victory at the Battle of Soissons in 486. Over the next 300 years, the Franks consolidated their power in the region. By the 9th century, their Carolingian Empire under Charlemagne (including the Rhône Basin, in Burgundia) would begin evolving into the state of France and the Holy Roman Empire.

Medieval Period (High Middle Ages, 11th-15th centuries)
From the middle of the 11th century, the Rhône region was largely controlled by the house of Savoy, which would eventually become part of France. The medieval period saw the establishment of cathedral towns, abbeys and a great wine-making tradition throughout the Rhône Valley region that exists to this day. In the 14th century, Avignon became the seat of the Roman Catholic papacy for much of the next 100 years.

Renaissance Period to 18th century
As part of the kingdom of France, the Rhône region's winemaking traditions brought it to prominence as perhaps the most important wine-producing region in the world. The official designation "Côtes du Rhône" has been in use for the region's wines since the 16th century; within the next hundred years, a set of rules was established by royal decree to prevent forgeries and guarantee the provenance of the wine. The Rhône itself was an important trade route at this time, but navigation — by coches d'eau (water coaches) drawn from the banks by men or horses, or sailing barges known as barques du Rhône – could be hazardous due to the river's strong currents, shallows and frequent flooding.

19th & 20th Centuries
As the Rhône region established its pre-eminence in wine production and distribution around the world, the advent of regular steamship service on the Rhône (begun in the 1820s and continuing through the early 1950s) dramatically increased the speed of commercial trade on the river. After World War II, the introduction of powerful diesel-propelled motor barges and the construction of canal locks and other navigational improvements made river trade and passenger transport on the Rhône even more efficient.

Geopolitical & Economic Importance Today
And here's one of the latest (and most delectable) Rhône River facts. Today, the Rhône Valley continues its prominence as one of the greatest wine regions on Earth, with more than 6,000 winegrowing properties — including over 1,800 private wineries and more than a hundred wine-making cooperatives — producing, distributing and exporting wine to the rest of the world on a massive scale.

The Rhône River in European Culture

Over the centuries, the civilizations along the Rhône River have contributed mightily to some of the most significant artistic movements in European history––and the river itself has inspired a wide range of works across the artistic spectrum.

Art and Painting
The Rhône region has spawned many artistic works and movements across the centuries, ranging from the religious art of the Middle Ages, to painting and sculpture of the Renaissance period and beyond. But it's the Impressionist painters of the 19th century whose works (and in some cases, lives) have become intertwined with the region, its landscapes and its people.

Provence — and Arles in particular — inspired the troubled Dutch Impressionist painter Vincent van Gogh, who produced hundreds of works while a patient in an asylum in the area, including many that attempt to capture the effects of night. His first such piece was Café Terrace on the Place du Forum, Arles. Later, he turned his attention to the nighttime view along the Rhône, portraying a rich mélange of blues, the intense orange of the city's gas lights reflected on the river, and the sparkling stars above. Four famous "starry sky" paintings are among the legacy of van Gogh's most productive period in Arles.

Literature
The Rhône region has generated numerous writers of note, including novelist Alphonse Daudet (1840-97) and his contemporary Paul Arène (1843-1896), both from Provence; the famous Colette (Sidonie-Gabrielle Colette, 1873-1954); and the author and filmmaker Marcel Pagnol (1895-1970). In addition, the region (especially Provence) has greatly influenced émigré and expatriate writers who have resided in the area, including Americans Edith Wharton and F. Scott Fitzgerald, Russian Ivan Bunin, Britons Somerset Maugham and Peter Mayle, and New Zealander Katherine Mansfield.

Cultural Institutions
A wealth of universities, monasteries, libraries, museums and other key cultural institutions — including some connected with the area's incomparable culinary and winemaking traditions — have flourished for centuries in the Rhône River region. A few examples follow:

Les Halles de Lyon, Lyon, France: This celebrated indoor food market, occupying various locations in Lyon since 1850 and currently housed in the city's Part-Dieu district, offers an unbelievable array of breads, cheeses, fresh fruits and vegetables, sausages, specialty spices, poultry, seafood from fish to oysters, wines, chocolates and other desserts. Everything is fresh and delicious, and it is said that the best chefs in Lyon shop here. Markets like this one are an indispensable culinary tradition in a city famous for its food.

Palais des Papes, Avignon, France: During the 14th century, the leadership of the Roman Catholic Church saw fit to move the papacy from then-troubled Rome to the fortified Provençal city of Avignon on the Rhône River. Although they stayed for less than a century, the popes who ruled from Avignon built themselves the Palais des Papes––today a UNESCO World Heritage Site, and one of the largest and most impressive examples of medieval Gothic architecture in all of Europe.

Viviers, France: In the Middle Ages, the town of Viviers on the Rhône had two distinct parts which reflected the equally distinct social divide of the time. "Common folk" lived in the Lower City on the river plain, while the bishop and the well-to-do resided in the hilltop Upper City. This well-preserved medieval city is crowned by the Cathedral of St. Vincent; largely built during the 14th century, it boasts flamboyant late-Gothic elements added in the 16th century and carved choir stalls and tapestries from the 18th century.

Food
With bucolic vineyards that produce a bounty of wines, lush landscapes fed by the Rhône River and cities like Lyon – long considered the culinary capital of France – that entice with some of the finest gourmet cuisine anywhere, the Rhône region is renowned for its cooking schools and culinary creativity. Master chefs perform their magic... pot-au-feu, quintessential quenelles, salade Lyonnaise and savory coq au vin. A trip to a local market introduces one to the vast array of fresh fruits and vegetables, locally produced cheeses, warm-from-the-oven baguettes, spicy sausages and pastries that make their way to the plate in infinitely delectable variations. They're made all the more memorable with a glass or two of the wine this area of the world is famous for.

Wine
In the stretch of Alpine foothills and sloping valleys along the Rhône that begin around Lyon are vineyard-covered hillsides, some on nearly vertical slopes, representing the pinnacle of the vintner's art in Europe, if not the world. Here, in regions including Provence and Burgundy, vineyards thrive in the Mediterranean climate, with more than 200 days of sunshine and cold, biting, rain-bearing mistral winds that enable the soil to store water for the long hot days of summer. Round pebbles double as thermal furnaces that store heat at night and help coax the vines to maturity. Magnificent châteaux in the area are emblematic of the importance of French appellations from the Rhône Valley, including Côtes du Rhône, Pouilly-Fuissé, Beaujolais and Châteauneuf-du-Pape.

What to Expect Along the Rhône with Tauck

Ready to explore these Rhône River facts firsthand? Tauck's river cruises along the Rhône offer more included exclusive experiences than any other river cruise company in Europe — from in-depth, behind-the-scenes sightseeing to included dining ashore in memorable venues. Here are just a few: