Classical Music along the Danube 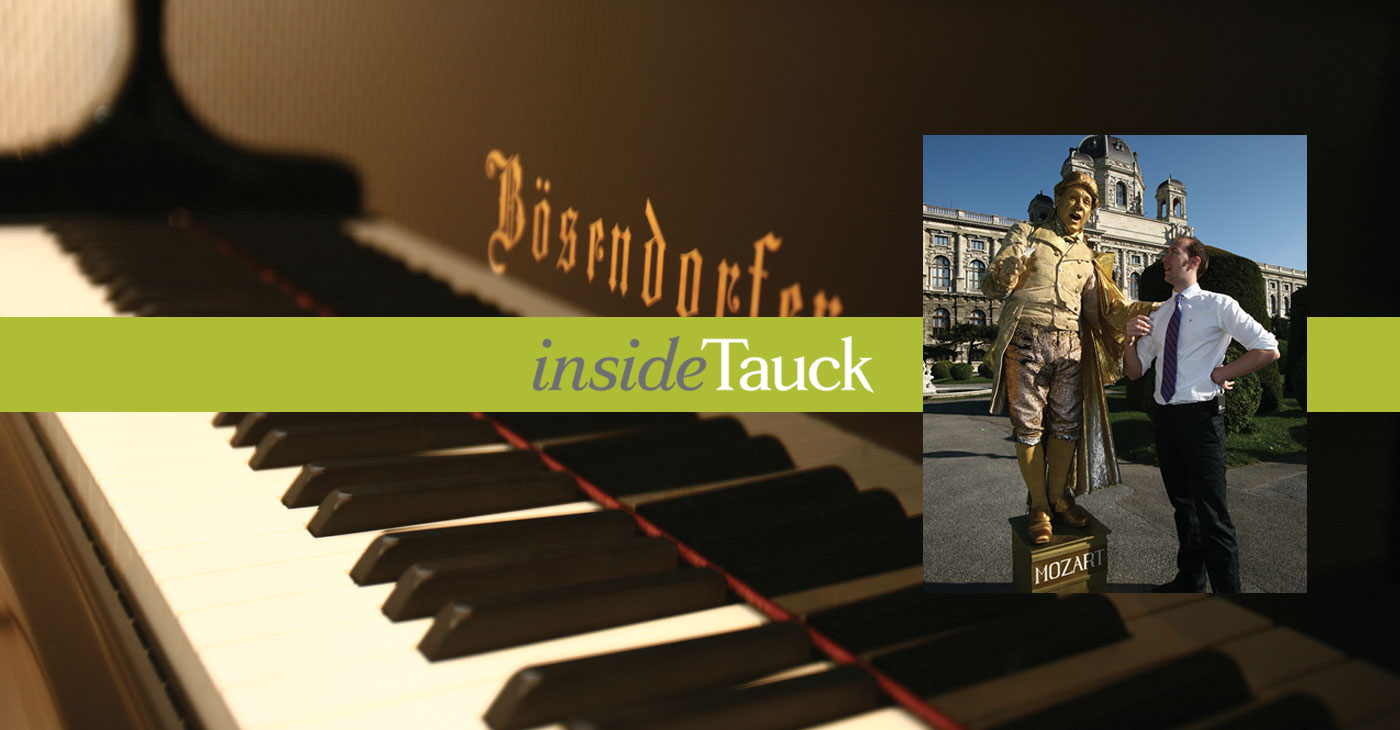 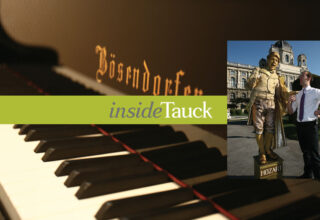 In 2020, our two insideTauck presentations featuring Michael Shaw (Tauck Maestro on our river cruise Musical Magic Along the Danube) were some of the most accessed by viewers. We’re pleased to share with you a very special – and unique – insideTauck event with Michael, “Classical Music along the Danube.” Michael, along with his fellow Maestros, will perform a virtual concert from the music featured on Musical Magic Along the Danube, focusing on stops in Budapest, Hungary; Vienna and Salzburg, Austria; and Prague, Czech Republic.

Michael will give talks about each of the cities before showing pre-recorded performances by the Maestros from their home base, including Amber Youell (mezzo soprano and pianist); Andrew Harringer (piano); Brittany Palmer (soprano); Raphael Fusco (pianist and composer); Eva Summerer (soprano); and Tatiana Roitman (pianist). For some additional insights into music, artists and influences along the Danube, see below.

Tatiana Roitman Mann holds graduate degrees from Manhattan School of Music, the Royal Academy of Music in London, and a DMA in Piano Performance from University of Minnesota. She has appeared as a soloist and recitalist across North America and Europe; radio broadcasts include Villa-Lobos’ Mystic Sextet on NPR’s Performance Today, and Bartok’s Contrasts on New York’s classical music station, WQXR, Gershwin’s Rhapsody in Blue on Little Rock’s KLRE. Mann’s recording of the original, big band version of Gershwin’s Rhapsody in Blue was released on Naxos in the album Jazz Nocturne – American Concertos of the Jazz Age. Currently Tatiana is an Assistant Professor of Practice in Keyboard Studies at Texas Tech University. Tatiana will debut as a Tauck Maestro next April.

Raphael’s genre-crossing compositions for voice, chamber ensembles, orchestra, and theater are performed by leading artists across the world in prestigious venues such as Carnegie Hall, Kimmel Center Philadelphia, St. Bavo Kerk Haarlem, Casa Milà and the Église de Saint Séverin in Paris. He has written commissioned works for artists and ensembles such as GRAMMY Award winning saxophonist Branford Marsalis, Barbara Dever, Chamber Orchestra of Philadelphia, Cecilia Chorus of New York and members of the New York Philharmonic and Metropolitan Opera Orchestras. In July 2021 he conducted the premiere of his first opera inSOMNIA at the Opernfestival Oberpfalz in Amberg, Germany and conducted the premiere of his second opera Der Telefonist – De Mörder to Middernacht at the Forum Neue Kunst in Oldenburg in October. Raphael studied at the Mannes College of Music, Manhattan School of Music, Conservatorio G. Verdi di Torino, Vienna Konservatorium, and Paris Schola Cantorum. Since 2019, Raphael Fusco has served as Senior Artist in the Institute for music theater at the University for Performing Arts in Graz, Austria. Raphael has been a Tauck Maestro since 2016.

In the 2019/2020 season, Eva sang the roles of MADDALENA and GIOVANNA/„Rigoletto“ in a production at SH-Landestheater Flensburg and will be premiering two roles in Raphael Fusco’s new opera „inSOMNIA“ at Opernfestival Oberpfalz in 2021 as well as CORNELIA/„Giulio Cesare“ at Theater Schweinfurt. In 2018/19 she gave a celebrated role debut as ERIKA in „Vanessa“ at Theater Flensburg where she also debuted as AMANDO in Ligeti: „Le Grand Macabre“. Further 2018/19 highlights include a performance of Konstantia Gourzi’s opera „Transformation“ which was staged in the Vatican in Rome with chamber orchestra, children’s and men’s choir of the Bayerische Staatsoper and a performance of Puccini’s „Suor Angelica“ as ZIA PRINCIPESSA for Opera Lucca. Eva holds degrees in voice and piano from the Hochschule für Musik und Theater München and Hamburg. She has been a Tauck Maestro since 2019.

Andrew is historian and pianist specializing in the Romantic era, and the music of Franz Liszt in particular. His research focuses on Liszt’s interactions with prominent figures in politics, the Catholic Church, and Romanticism, encounters that shaped his musical style in profound and interconnected ways. Likewise, his work as a musician centers on Liszt’s solo piano works, especially those inspired by poetry, literature, and the visual arts. Andrew’s research has appeared in Current Musicology, the Journal of the American Liszt Society, and The Oxford Handbook of Topic Theory, as well as two chapters in Liszt in Context (Cambridge University Press, forthcoming). Andrew has performed in both solo and chamber concerts throughout North America and Europe. His interest in Liszt led him to study under Dr. Csaba Király, one of Hungary’s foremost pianists, with whom he collaborated in a five-concert series in cities throughout Hungary. Andrew studied music and history at Dartmouth before earning his PhD in Historical Musicology from Columbia University and an MA in performance from the University of Pécs, Hungary. Andrew has been a Tauck Maestro since 2011.

Amber Youell is a mezzo-soprano and 18th-century scholar who loves wigs and coloratura. In October 2012, she completed her PhD in Historical Musicology from Columbia University, with a dissertation on opera, fashion, money, and politics at the court of Empress Maria Theresia. For Morningside’s 2009 production of Alcide al bivio, Amber constructed a performance score from manuscript, acted as dramaturg, and performed the leading role. Amber designed Tauck’s Musical Magic on the Blue Danube river cruise in 2009, and was a Maestro on the first Music Cruise in 2010. Since 2013, she has been the head of Tauck’s European office in Basel, Switzerland, acting as Tauck’s Director of Operations for the European River Cruises.

Michael studied singing at the San Francisco of Music, where he sang leading baritone roles in over ten operas and gave numerous song recitals. He received an MA from Notre Dame (2006) and a PhD in Historical Musicology from Columbia University (2014), focusing his research on Schubert’s Lieder. Michael was a member of Morningside Opera in New York City, sang in six productions with that company, and produced the orchestral score for Morningside Opera’s 2015 premiere of Freeman’s 1914 opera Voodoo. Now living in Basel, Switzerland, Michael holds annual concerts of Schubert’s music, is a member of the choral ensemble Zero Nove, and recently completed the operatic project Semele. Michael has been a Tauck Maestro since 2010. 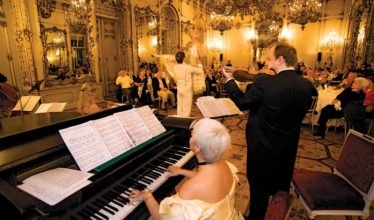 Musical Magic Along The Blue Danube 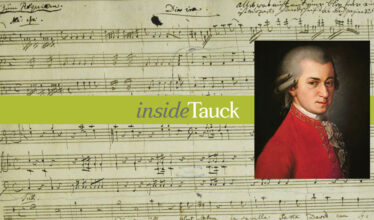 Mozart, A Life in Music 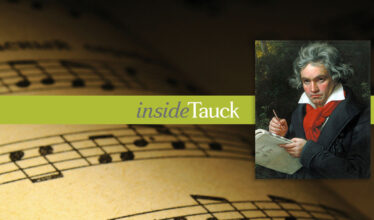 Life and Music of Beethoven