Sometimes you just have to unplug!

I am sitting by the Rock River in Vermont, and the water is so clear you can see the bottom of the swimming hole. No one filters the water, it just flows down the mountains that way. You can drink it. It’s a revelation for a city dweller to come out into the country and see the natural beauty and harmony of the wild earth without humans doing anything.

I’m off the grid, with no Internet or cell phone service, and I don’t miss it at all.

Usually if I want a drink, I turn on the tap and water is provided by the water department. Or I can buy a drink at a store. But out here things just happen, as if orchestrated by an invisible hand.

The trees stand high above me, noble and serene in their demeanor, swaying gracefully in the breeze. Clouds, giant puffs of water vapor, float overhead against the deep blue sky. Birds punctuate the rushing sound of the river with musical figures. A chipmunk ventures near my feet, watching my reaction closely. I take a deep breath, pull the fresh air deep into my lungs and I feel my body relax. A sense of well-being descends over me.

This magnificent production in full color, 3D and surround sound, is continually in progress, transforming moment by moment, and no human being is making it happen. No one is going to send me the bill. There will be no announcement as to whom this was “brought to you by.” There will be no pop-ups urging me to subscribe or like their Facebook page.

Don’t get me wrong. I am a lover of cities and the great cultural and material riches of civilization. I love the new technologies as much as anyone. It’s a wonderful world, with practically everything we could want available to us through our computers and smartphones. It’s no wonder we spend so much time immersed in those little screens.

But we do need a break sometimes. 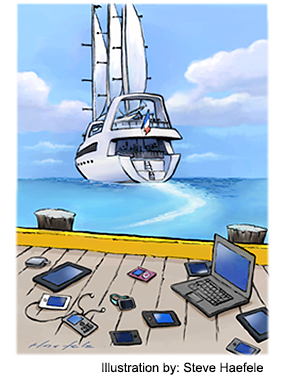 I recently saw an ad for an off-the-grid tour. It offers an experience in a natural environment, but its main feature was what it does not have: connectivity.

If you go on that tour you will experience cold turkey – a full-on withdrawal from the grid. There will be no temptation to check your email, because it will not be an option. As a confirmed Internet addict it is easy to see why that would be appealing. Speaking for myself and practically everyone I know, we are hooked.

The miniaturization of the computer into a handheld device put the immense power of the Internet into the palm of your hand. Handheld computers spawned a new generation of innovations, including social media, which makes it even harder to put down.

There is no doubt that these technologies are not only fascinating, but have the power to enrich our lives, help us keep in touch with people, and even conduct our businesses.

But as good as it is, it is still coming through a little electronic screen. And it is sometimes good to look beyond the screen at the physical world around you.

Life in the Skinner Box

At one point I faced up to the fact that my immersion in the Internet is an addiction. Addictions are not only to drugs. The same thing can happen with anything that absorbs so much of your attention that it begins to close you off from the world.

The psychologist B.F. Skinner conducted an experiment in which he subjected each of three rats to different conditions. He put them in a charming contraption known as the Skinner Box. In it were three chambers identical except in regard to the operation of prominently displayed levers.

The lever in the third chamber responded intermittently. The rat would receive a pellet the first time it pushed the lever, but then not again for a number of tries. Then intermittently it would be rewarded with a pellet. In the case of the intermittent reinforcement, the rats became obsessed with trying to get that reward.

I have recalled that experiment when I have seen people parked for hours in front of slot machines repeatedly pulling the levers. And unfortunately I see the same thing in myself when I get lost in the Internet. Sometimes after I have been sitting motionless, hunched over the computer for hours, I seem to get a glimpse of myself in one of those Skinner Boxes.

Lost in the Matrix

Sometimes I let the virtual world practically crowd the real world out of my life. I have to learn to manage it or I could become like those embryonic people in “The Matrix” whose entire lives are experienced through virtual reality.

I see families at restaurants all looking silently at their smartphones. People often carry on conversations while looking at their phones instead of the person who is there.

I cast no stones. I often catch myself ignoring everything to look at my iPhone. I have to laugh at myself.

Sometimes I find myself looking at my iPhone first thing in the morning, before I’ve even had time to wake up. At that moment my mind is like a pure vessel, smooth as the surface of a still pond at dawn. Then I open up that screen and all this random stuff from Facebook comes pouring in, the platitudes, political squabbles, ads and pop-ups in my face telling me to “like” something. It’s too much random babble to shove into the mind first thing in the morning.

Now we have many new social media networks. Each has its value, and for many businesses now it is considered essential to have a social media presence. So now social media is not just for fun, it is a business necessity.

It takes time to maintain all these networks, but a human being’s time is finite. So at some point I figure I have to draw the line and decide to put down the phone and take a look around, participate in the things in my actual environment.

There is still a difference between the virtual and the actual physical world around us. And as good as virtual is, it is only a shadow of the real.

Oh, but it is hard to resist! There will be that one thing I really need to check, or so I think, and then I’m pulled in and I may not emerge for the rest of the day. Once I’m into it, there will be one thing after another pulling me this way or that. It has swept me away like a leaf in the wind.

I have come to the point where I know I have to limit it. I have to give it an occasional break, balance it with the real world. When I am immersed in my cell phone, regardless of how I may justify it with talk about multitasking, I’m not really here.

Sometimes it’s good to really unplug and detox for a while. And that brings us back to our reliable friend: travel. There is no better way to break mind-numbing routines than to pull yourself up, untangle yourself and get away.

When you travel, you are pulled away from all your routines and into full awareness of the present. And spiritual teachers say the best way to be healthy and balanced is to be fully immersed in the present.

Travel is one of the few things that is so engaging that it inspires you to put your phone down and reconnect with the world around you. After that first act of will, when you resist the pull of the phone and put your attention elsewhere, it becomes easy. After I have been off the grid for a few days, I get hooked on the real world. The world of the screen loses its appeal and I become reluctant to dive back in.

I haven’t taken an off-the-grid tour but I have been off the grid a number of times during my travels and it can be wonderful. It’s jarring at first to realize that I can’t go to my phone, I can’t check my email. But soon it starts to feel perfectly natural. I start paying more attention to what I am doing right here right now in the physical dimension.

The importance I place on Internet content rapidly diminishes and pretty soon I am completely at home in a world without connectivity.

I suppose we will always have these electronic connections now. But it helps to give them some space and balance. It’s nice to live in your actual physical environment and interact with real people who are physically present and not always be looking into our computer screens.

I came to a big decision recently. I’m quitting Facebook. That’s it. No more. Just one more thing. I have to go on Facebook to announce my decision.

Oh brother. I don’t know. Am I crazy? Is it just me? What do you think?

Until we meet again, I bid you fond farewell and,